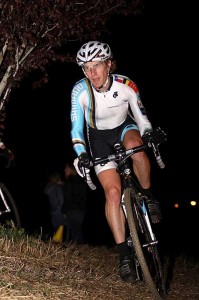 Ok, all I’m saying is… where the hell is the coverage of the new Chris King road stuff from Interbike?! I barely got to see those things when they were getting built up in the Veloshop. More info please. (this may also be due to the fact that I’ve stopped reading cyclingnews).

A rare sight. Captured here in its natural environment… the beauty, the grace. Quietly perched upon a Cielo. This majestic beast, poised to strike… a fleeting moment now preserved on film.

Decided very last minute to bail on all of my real life responsibilities yesterday and head over to race my pal’s Wednesday evening race series. Blind date at the dairy was held under the lights, in the dark. I hated the first few laps, I had no idea where I was pedaling, what the hell I was riding over. And the Alpenrose course is too too bumpy. Like really bumpy. “bumpy as shit!” is how I put it more than a few times.

Fair to say that I was exhausted last night and probably would not have won if not for a competitors mid-race tubeless tyre burping that forced him to visit the pits. I don’t think there is a lot of glory in winning due to another riders mechanical issues.

I would like to note that I raced on my Dura Ace tubeless wheels set up with those Hutchinson Bulldawgs. So if it comes down to having the best gear…

And ps: Speedplay, I thought I was the only one allowed to put “Y” in all my words like I am Euro or something. You can’t name your new cx pedals the SYZR. My cellphone is named the RAZR and that is bad enough.